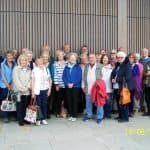 It was announced that one of the members, Jim Green affectionately known as “Gentleman Jim” had passed away following a short period of illness. David Slack announced that there had been a very good take-up of tickets for the President’s Lunch to be held in July in lieu of the regular Tuesday Member’s Meeting. In the absence of Graham Hannen whose… END_OF_DOCUMENT_TOKEN_TO_BE_REPLACED

The Club has purchased a large projector screen and projector to help guest speakers if required and will be used at monthly meetings to highlight events and other important notices. On behalf of the events co-ordinator, who could not attend the meeting, it was announced that tickets were available for the President’s Lunch to be… END_OF_DOCUMENT_TOKEN_TO_BE_REPLACED 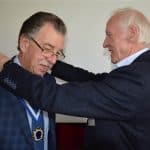 This month’s meeting incorporated the AGM at which a new President was appointed, together with a new Vice President. Eddie Timmins succeeded Ken Jones as President while Steve Parfitt became Eddie’s Vice President. Two new Members were welcomed in to the Club at the meeting, Dave Nash & John Whittingham. Additionally Des Donnelly was made… END_OF_DOCUMENT_TOKEN_TO_BE_REPLACED

There were three visitors to the 2019 March Member’s Meeting and one new Member, Mike Taylor joined the Club. The Club’s outdoor bowling season starts on April 2nd on the top green in Sandbach Park. Weather permitting. Graham Hannen who has tirelessly organised the Club’s outings and Annual Holiday has been seriously ill and unable… END_OF_DOCUMENT_TOKEN_TO_BE_REPLACED

Members agreed that Alan Cooper be admitted as a new member, having transferred from another Probus Club. The Members were informed that Graham Hannen, who has done so much for the Club was very ill and the Members sent their best wishes for a speedy recovery.The indoor bowling is coming to an end having been… END_OF_DOCUMENT_TOKEN_TO_BE_REPLACED